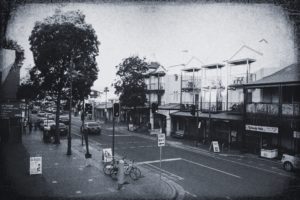 “It’s a shame, Melbourne Street used to be great…..”

Was the comment beneath a post a few weeks ago, following the unfortunate closure of a small business on Melbourne Street. I grimaced and shook my head, giving a sad sigh for the attitude of yet another person publicly casting an oft-shared view over this lovely street.

I made a start to comment, and then chose otherwise, deciding it was better to just let it go:

‘Everyone is entitled to their opinion. Just let it be.’

But… the thought stuck with me and kept percolating in my mind. So, I decided to write about it.

You see, I love Melbourne Street. I’m a big advocate for this pretty street; I have run a business here for 8+ years in various locations along the street, and I also lived on the street for a time. I frequent many of the businesses here not because they’re close by but because they’re some of the best at what they do.

I’ve consistently found Melbourne street, the businesses on it and the community surrounding it to be supportive, close-knit, creative and kind.

There are some stalwart businesses – Melbourne Street institutions, if you like – (like the Fine Wine Cellars, the Art Gallery, Raffi’s, The Lion and so many more) – who have been here for aeons, and the smaller businesses, like mine (Clarity Massage & Wellness), who are equally thriving and held up by the support of our close-knit community.

Yes, some businesses have come and gone, as with any business location it is integral to ascertain your market and which location is most suitable. Melbourne Street has changed a lot over the last 15-20 years. The street is not accessed and used in the same way it once was, so in turn, the balance of the types of businesses on the street is different. And that’s okay! It can be progress, if we shift our perspective a little. 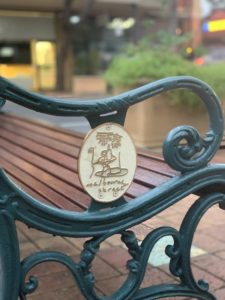 The “strength of a village” could not be more apt, here.

Melbourne Street is home to award-winning businesses. In fact, as I type this, there are a number of us who were shortlisted, by public vote, in the 2019 City Awards – an accolade given to businesses who are publicly voted as the best in their field (we were thrilled to win Adelaide’s Best Health & Wellbeing for the second year running!)

So, reflecting back on the comment… I decided that it really IS worthwhile saying something, rather than just letting the street take it on the chin again, because no change is ever affected by inaction.

Have you heard of ‘herd behaviour’ or ‘information cascades’? This is the notion that people, inherently, want to be a part of the group, and what the group are saying and doing.

Or, in the words of the great Mermaid/philosopher Ariel: “I wanna be where the people are…” 😉 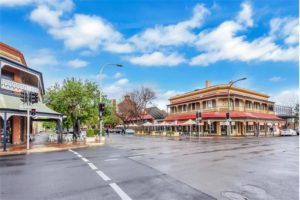 If people routinely talk discouragingly about a location or a place, you can bet that, as the information cascades, less and less people will frequent that area. I mean, why on earth would they? It’s so terrible.

It’s a self-perpetuating cycle of denigrating something – a street, in this case – which in turn drives less and less people to the street, thus creating the precise scenario that was suggested by the negative comments in the first place!

I cannot count on all my fingers and toes the number of North Adelaide business networking or street trader events I have been to where the focus is on what is NOT happening on the street. The “Oh, it’s such a shame Melbourne Street isn’t what it used to be” comments…

In my years on the street I have heard all of the fantastical stories from the days of old, fond recollections of the retail hub that Melbourne Street used to be…

Sure, it might not be the “retail hub” it once was ‘back in the day’, but we have got a greater amount of brilliant service-based businesses which not only employ a large number of people, they also attract a broad range of clients, patients and customers to the street, who attend the retail and hospitality businesses. We see swathes of people who frequent multiple businesses on the street when they visit – Melbourne Street offers a wonderful experience!

I recall at a Council-run event some years ago for some place-making work, we were shown a statistic which showed that the balance of the types of businesses on Melbourne Street had totally switched. On what was once a retail-based street, it was now 66% Service-Based Business and 34% Retail.

I think that it would afford us well to stop focusing on what it once was, and start to celebrate what we now offer. In the words of old mate Einstein: “Insanity is doing the same thing over and over again and expecting different results”. Ergo: If we keep focusing on strategies to build the types of businesses which are no longer the greater percentage of the street, it aint gonna work.

Now, please note here – I am not a naïve optimist. I consider myself a realist (indeed a cynic, depending on the day ;)). I am keenly aware of the significant challenges of starting and growing a business, and the risks and stress associated with that. I am aware of the fact that Melbourne Street has a number of vacant properties, that we have experienced turnover of small businesses in recent years.

I can see that – as one will see on many Adelaide main streets.

However, what I can’t see is the benefit in routinely focusing on this element of the street, and moreover, routinely sharing that publicly.

This concept isn’t just some soft ‘n’ fluffy nicety. ‘Herd Behaviour’ is a common and proven behavioural economics theoretical concept engaged by many successful companies and businesses; by highlighting the positive parts of their offering and experience and celebrating those who are a part of that (eg. their customers, clients, team), more and more people will want to be a part of it.

It is much more effective than complaining about the bad bits (like customers who don’t pay or empty shops, or similar), in the hope that it will change.

In short: you just wanna get more people doing the good thing, in order to weed out those who aren’t. It’s pretty simple, really – but measurably effective.

I’m not suggesting that we blindly ignore opportunities for improvement and all walk around hand in hand singing kumbaya – but I am confident – based on those theories above – that improvement is more likely to occur and more people are likely to come and visit the street, if there is some positive energy behind it.

And WE, the street traders, residents and supporters of Melbourne Street, need to be the ones to stand up for it. We shouldn’t blame + complain that “the council aren’t doing anything” (or similar) if we’re not actually standing up and celebrating our awesomeness, proving that we are a worthwhile place for people to visit, engage with and to invest in. Sure, parking can be a pain in the ass – but people will allow a few extra mins to find a spot to park if they believe the place they’re visiting is worthwhile!

I really believe that we should be focusing on celebrating the businesses that are thriving, publicly demonstrating our passion and confidence in the street, and in one another. We’ve got some exciting new developments starting, fresh new places coming to the street.

If we want people to come here and join us, we’ve gotta show a little faith in our little village.

Because a place with that sort of energy is a place that the public want to frequent.

That’s what I reckon, anyway.

To my Melbourne Street neighbours, colleagues and community; Thank you.

Thank you for all the conversations, collaborations, support, food, coffee, laughter, camaraderie and friendship. Business can be tough, and it’s nice to know we have neighbours looking out for us, and helping to take great care of our much-loved client base.

What we have here on Melbourne Street is actually pretty special, we’ve just gotta believe that, share that with the public – and stand up for it when people suggest otherwise.

Great change can happen, with the strength of a village. 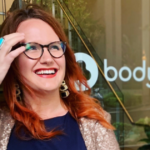 Hello, thank you for visiting 🙂

We are reopen as of July 28th for Remedial Massage, Pregnancy Massage, Facials, Packages, Acupuncture & Naturopathy

Unfortunately our Classes will not be kicking off until the per sq.m rule is reduced somewhat – hopefully next week

Please note: Masks are mandatory for all team members and clients within the centre, with the exception from SA Health:

“A mask can be removed by a customer or client if required for the service, provided it is only removed for the time taken to receive the service.”

Keep up to date with our latest COVID announcements here
Well done and THANK YOU to everyone for contributing to the health & safety of our state, let’s do this!

We wish you warmth and wellness x

Must be used by the recipient named on voucher

The Named Service must be booked and taken within 12months, after which the Value (amount paid) of the voucher is valid until the 3 year expiry date.

Code / Number is required at the time of booking

Can be redeemed for a service of the same or lesser value, or you can upgrade by paying the difference

Can be used for Remedial Massage, Pregnancy Massage, Reflexology, Facials and Packages.

Cannot be used to purchase gift vouchers or be exchanged for cash, legal tender or products

Prices are liable to change: at the time of redemption, if a service price is more than the amount the voucher was purchased for, the recipient is required to pay the difference

Gift Vouchers purchases cannot be claimed on Private Health. The health funds have advised that they do not pay benefits for services when the services are fully covered by a third party.

As per our Late Notice Policy; Cancellations, rescheduling or amendments to your booking within 24 hours of your appointment will result in a $50 fee

Services paid with a Gift Voucher cannot be claimed on Private Health for Rebates. The health funds have advised that they do not pay benefits for services when the services are fully covered by a third party.

If you require further information in relation to health fund rules & policies, please refer to the Massage & Myotherapy Australia website.